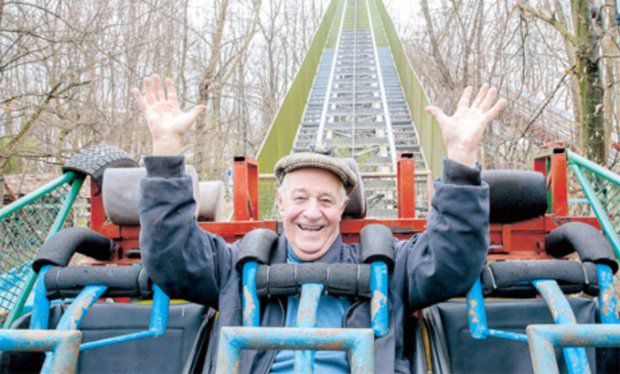 Bruno Ferrin is 79, but he has the enthusiasm of a boy. In 1969 he opened his restaurant near Treviso, Osteria Ai Pioppi, and since then he never stopped working. It’s not the osteria itself that gives him much work, though, but a project suitable for a new Leonardo da Vinci. Just like in our Team Building activity Leonardo’s Machines or Mad Scientist…

An inventor at work

In the wood around it Bruno Ferrin is building an amusement park of his own!

In these almost 50 years Bruno built more than 50 amusement rides. The small ones are made of reused materials and built directly in his laboratory, while for the biggest ones there’s a project developed by a study of engineers, and the materials are bought new. But it’s always Bruno the one who builds the rides with his own hands! He also does maintenance of them, helped by his family, mostly by his grandson.

Thanks to their work, Ai Pioppi park has a lot of amusement rides, that are nothing to envy to the biggest funfairs. There is a loop the loop moved by pedals, some slides, a trampoline, two bobsled tracks, and a lot of original rides invented by Bruno: The Bells, The Virtuvian Man, The Cage, Tarzan… all good for kids and grownups!

The originality of this park? All the amusements are moved by manual force, pedals, or gravity! Ai Pioppi doesn’t need any electric energy. That’s also why the entrance of this park is completely free: all the customers of the restaurant can use the park without restrictions.

So, Bruno Ferrin’s project is two times ecologic, because it doesn’t need electricity and because it uses recycled materials. Also many trees of the park have been planted by Bruno. It’s a perfect place to enjoy with children, because it’s not only fun, but also teaches them to care about recycling and to have fun close to nature, just like we did in our own childhood.

In the 2012 arrived also the media success, thanks to a documentary by FABRICA followed by many publishings in the press. Restaurant and park now have a website (aipioppi.com), a Youtube channel and a facebook page. Take a look at the video that made Bruno Ferrin famous!

We also developed Team Building activities linked to inventions, such as Leonardo’s Machines and Mad Scientist. Do you want to try them or some other Team Building format? Click HERE to contact us for more information!